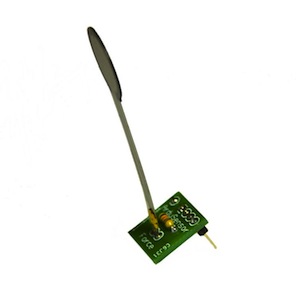 A force sensitive resistor (force sensor) is basically a pinch sensor.  It measures the force inbetween two objects, say, your fingers.  When you pinch the top circle harder, the value goes up.  You could even put the force sensor on a desk and see how hard you could press down!

First off, if you don’t know how to solder, go here to learn the basics so that you are thoroughly prepared to assemble your kit.

You will need to get on your own:

Take out the ArduSensor Force PCB out of the the bag and put face up into a vice or third hand. Insert the force sensor into the copper holes corresponding. Flip the PCB over and put it back into the vice or third hand face down, so that all of the leads show on the back.  Bend the leads outwards in opposite directions. Put your soldering iron on one of the junctions where there is a copper hole, and one of the sensor legs popping through it. Repeat this process once more to the other joints with the copper hole and a force sensor leg popping through it.

At the base of the force sensor (metal part), bend the sensor so that the sensor is standing up straight.  Only do this once, for bending it too much will cause it to break off of the ArduSensor PCB.

After you are done, flip the PCB over again so that the text and force sensor are facing upwards. Bend the leads so that they make an upside-down “U” shape. Put these two leads into the 10K ohm resistor footprint on the PCB. Flip the PCB over and bend the leads of the resistor out in opposite directions. Solder the two copper holes that have resistor legs popping out of them (using the same method as before). Trim the leads so that they don’t poke you. Solder in place.  But make sure that you don’t put too much solder in, because that can cause the ArduSensor Force to be permanently installed on your Arduino! The Arduino IDE should open up with the ArduSensor Force Read sketch.  This sketch prints out a value of 0 to 1000 proportionate to how hard something (or your finger) is pinching the sensor.

First, make sure to select the board that you are using from Tools > Board. Then, go into Tools > Serial Port, and select the correct COM/Serial Port.  On a Mac, the usual Serial Port will be /dev/tty.usbmodemfa131.  Any small variation of that will be fine. On Windows, the COM Port will usually be COM 4, and anything lower or higher might work.

Here are the basic buttons/functions in the Arduino IDE: Press the Serial Monitor button (in the upper-right hand corner), and you should see that it prints out a number from 0 to 1000 based on how much the sensor is pinched. If you have any more questions on this product or how to use it, contact Qtechknow Tech Support at support@qtechknow.com